The Goddesses by Swan Huntley 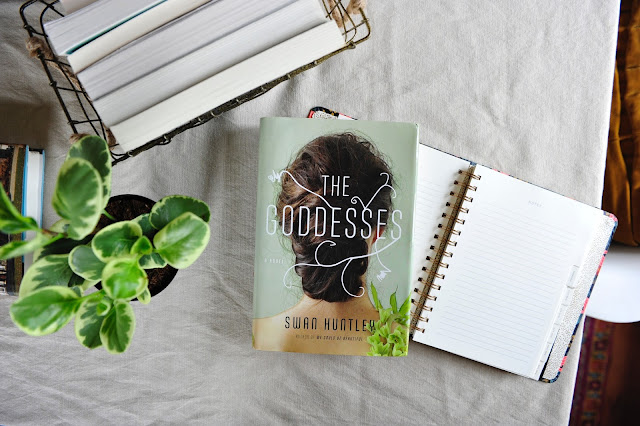 Review:
I could not wait to get my hands on Swan Huntley's newest novel, The Goddesses, when I heard about it this Spring. I loved her first book, We Could Be Beautiful, which captivated me last summer (read my full review here). I think I finished it in two days! So, like I said, very VERY anxious to read her second book. ((And isn't that cover just GORGEOUS?))

Told from the perspective of a middle-age mom of twin boys who moves to Hawaii with her family to try to save her marriage after finding out her husband cheated on her, Nancy quickly became an interesting character to me. I was thrown a bit at first, mostly because of her age, wondering if I would be able to relate to her as a character throughout the story. From the summary I had read, in my mind I pictured Nancy and her friend Ana to be younger. Fortunately and due to Huntley's character development, I quickly found myself relating to Nancy in small ways. Mostly the ease in which life becomes ordinary and redundant (the same grocery store, the same dinners, the same towels hanging from the rack). I felt like buying new towels for our house after I finished this!

And then as the story progressed, her relationship with Ana became more relatable to me than her marriage problems. I think we've all had a friend at one point or another who is more dominant in the friendship, who we want to impress and do things with and think about because their life seems so much "cooler". But having that turned around on you, when all of a sudden they just "happen" to get the same shoes in the same color, want the same tattoo as you in the same place, adopt the same type of dog...well it can be a little creepy and a lot less flattering. Reading The Goddesses was kind of like watching a train wreck....you could tell it was going nowhere good but Nancy just couldn't let go of Ana and vice versa. Like I said, I think most women can probably find some relatable aspect  throughout the story, that will make you go "oh yeah, thats kind of like that friend I had...."

The setting was another part of the story that I felt really added to what was happening between the characters. The fact that it begins with their arrival in Hawaii and at the culmination of the story ends with them leaving, lends a sort of dreamlike atmosphere to the story as a whole. Almost like it maybe didn't actually happen, that it was all a dream. I loved the descriptions of their home, the lush jungles and violent volcano just waiting to erupt throughout the entire book. It really added to the exotic and strange elements in the book.

I loved how the story ended and really felt Swan Huntley did a great job showcasing this abnormal and unhealthy friendship in such a way that you almost didn't realize how bad it was until Nancy did. So happy I had a chance to read and review it prior to it's release on July 25th (thank you Doubleday books!)

I would recommend The Goddesses to anyone who is looking for a quick summer read and likes books that are more psychological, that play on character's problems and subtly take you to the end and then throw you for a loop!