The Stars are Fire by Anita Shreve 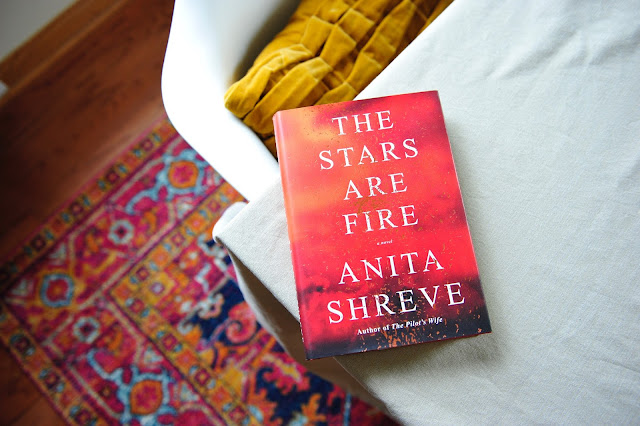 One of my favorite things about finding an author you love is that you're usually not disappointed when they release another book. You know what to expect as far as writing and content (usually) and its much less of a gamble than randomly picking a book off the shelf!

I've been reading Anita Shreve's books since high school, about fifteen years ago? maybe ten...haha. The first book of hers that I read and fell in love with was Fortune's Rocks. My friend and I have reread that particular book multiple times since high school, as it has become somewhat of an old friend by now. I won't say I've read every single one (I haven't) or that I've loved every one that I have read (I haven't) but overall, I haven't been disappointed either. My favorite stories of Shreve's are those that take place in the past...particularly the stories that center around the house on the coast (it comes into play multiple times over a few different books, which is just such a neat element).

In The Stars Are Fire, Shreve takes an event from the past (the largest fire in Maine, which happened in 1947) and makes it a riveting back story to the main character Grace and her family. Grace is struggling to find happiness in her marriage, finding herself pregnant again (with two toddlers already) and constantly comparing herself to the neighbor across the street. As the fire burns through the Maine coast, Grace flees and finds herself no longer at the mercy of her husband and their old life. In a metaphorical way, the fire burns just as Grace's desire to live and enjoy beauty burns within her, until it has no where else to go but out.

I really enjoyed The Stars are Fire, Grace's struggles were not too far from ones I could easily put myself into and wonder what I would have done in the same situation. Being a mother is ridiculously hard sometimes and watching Grace struggle with her role as wife and mother in a time period when simply having her own money and car were cause for a husband to take them away, made me feel so grateful for where society is today. Grace's character is one that I will remember for a while, one of Anita Shreve's good ones.

I'd recommend this book to anyone who enjoys a little historical fiction, a strong female character who is working to overcome the odds set against her by time and gender roles and who most of all, is looking to be seen by someone, looking to be loved. If that all sounds great to you, then this should be your next read!