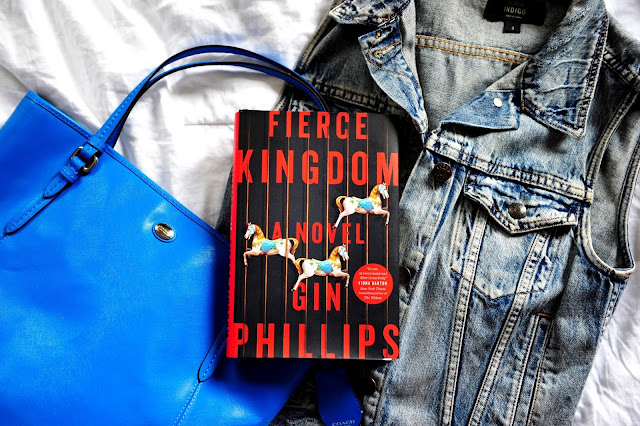 It's Friday and I thought a quick review of this fast paced thriller was just the thing for today! Fierce Kingdom by Gin Phillips is one of those books that once you start reading you won't be able to put down until the ride is over.

I feel like this book deserves two reviews from me. One as a reader and one as a mother of a four year old little boy. So let's try that.

As a reader, the suspense this book created as the story progressed kept me at the edge of my seat. I couldn't stop turning pages and I loved how real it all felt. I also appreciated the different viewpoints, which I wasn't expecting based on the synopsis. All the way up until the ending, I wasn't sure what was really going to happen to the mother Joan and her four year old little boy as they tried to hide themselves in the zoo while gunmen were on the loose. There isn't much character development going on here, although I feel the author tried to incorporate the mother's childhood into parts of the story. I was more interested honestly in what was happening in the moment.

As a mother, my goodness. I read the first chapter and then put the book down and had to take a few breaths. I have been in the EXACT same moments with my four year old son. Recently. Like yesterday. Discussing the pros and cons of super heroes and creating battles while I'm trying to think of what we need from the grocery store and if we should leave the park/zoo/splash pad yet. The first chapter kinda knocked the wind out of me and I needed to regroup. I picked it up the next evening and once I did, I didn't put it down until I was finished. But, certainly the first half of the book, left me feeling anxious and panicky. There have been plenty of times when we've been at the zoo or park together without my husband that I've had the passing thought of "What if..." and "What would we do first..." if there was some kind of trouble. This story really hit me hard in that sense as I watched a mother I was all too familiar with actually in one of those situations. There were actual lines as well, like this one: "She wonders when he will stop wanting to hold her hand..." as they walk towards the zoo exit that I think myself often. That I'm lost in thought thinking about as we hold hands walking out of the park, not really paying attention to my surroundings.

And this one, "In a year he will be in kindergarten and these days of superheroes will fade and be replaced by something she can't guess, and then at some point the zoo itself will be replaced and life will have gone on and this boy holding her hand will have turned into someone else entirely." YOU GUYS. This exact thought is in my head all the time. I think about it so much, as we do things like go to the zoo and the grocery store and take walks. So when Joan is thinking these thoughts about her little boy and all of sudden a madman with a gun is in the zoo killing people, I felt like I was there with her. Trying to protect my four year old, hide and stay safe but also not scare him too much. And as the time passes, as Joan starts remembering her little boy as a baby and the all the special moments they shared, as she starts to worry that maybe they won't make it out of the zoo...my heart just wanted to stop all together!

To say the least, this was an intense read for me. But it was worth every page of anxiety and suspense and I highly recommend it! Grab it, throw it in your purse for a long car ride or plane trip or plan on staying up way to late to finish it.