Heather, The Totality by Matthew Weiner 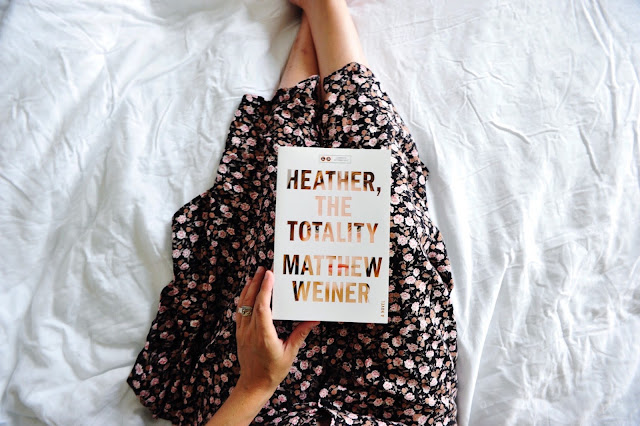 Review:
I wasn't entirely sure what to expect from this short book so I grabbed it off my stacks on a whim last night and took it upstairs with me to read before bed. At 134 pages, Heather, The Totality by Matthew Weiner may seem like a harmless read but trust me, it is not. In those short 134 pages, Weiner is able to pull you into the present day of a family of three while also giving you enough character backstory and development at the beginning to feel like you do really care what happens to Heather and her parents. With four characters total and the streets of NYC as the setting, HTT pulls you in and doesn't let go until the final page. I am wary of saying too much (even the synopsis of this is rather short and vague, for good reason) but I will say that living alongside Mark and Karen and their daughter Heather for an hour last night had me turning each page wondering what was going to happen, where Matthew Weiner was taking all of us.

Matthew Weiner was the director of Mad Men (one of my favorite shows) so I was also curious as to what we would see of NYC as well as character development in this book. His vision and unique ability to create a seeming indifference in his characters while in actuality they may be a mess inside their heads is something that translated through to the screen during my years of watching Mad Men and in reading this, did so for the characters of HTT as well.

"...she had come to understand that you could never see yourself the way others did, and it was okay to appear isolated as long as you remember that you are not the way you are seen."

Recommendation:
I would recommend this book to anyone looking for a quick, suspenseful read with a lot of interesting character development.

I gave this a rating of 3.5 stars on Goodreads and am thankful to Little Brown for the opportunity to read this in advance! It will be available for purchase October 31, 2017!