It's Not Yet Dark by Simon Fitzmaurice 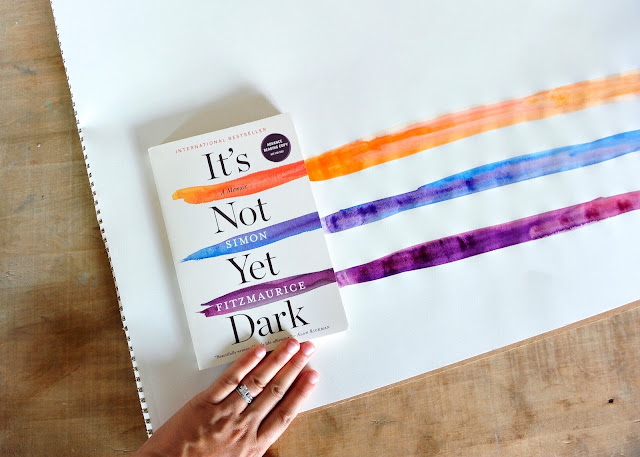 Review:
I received a copy of It's Not Yet Dark by Simon Fitzmaurice from HMH books a few weeks ago, letting it sitting on the top of my TBR stack while I considered when I would be ready to read it. A short memoir, it wasn't the time available that I was worried about but the emotional affect such a story was going to have. When I finally picked it up a few evenings ago, needing something 'real' to read for a bit, I wasn't wrong. It was incredibly emotional, leaving me at a loss for words after the last page.

Told in small glimpses, short paragraphs recounting moments and feelings from Simon's past and present, this story left an enormous impact on my heart. Simon was a father of two, husband, friend, artist, director, son when he was diagnosed with ALS and given only a short three-four years to live. During those years, he rocked between depression and hope, trying healing techniques and battling a strong will to live. Since then, he and his wife have had three more children, they've traveled and moved and he's directed movies. He's lived, while others said he wouldn't. He's persevered when he felt like he couldn't. His story is truly a remarkable one. And he asks the hard questions.

"I want to live. Is that wrong? What gives a life meaning? What constitutes a meaningful life? What gives one life more value than another? Surely only the individual can hope to grasp the meaning of his or her life." p.84

There are so many corners folded over in this book, marking passages that captured my heart and attention. Too engrossed to get up and find a pencil or page marker, I folded those corners and kept reading until I fell asleep. The next morning I woke up and grabbed the book first thing, finishing the last fifty pages or so in a state of admiration for a man who has had his life taken away and still gets up in the morning to marvel at his small children running through the house, his wife passing by the doorway.

This passage, which I reread after I finished the book, spoke so true to me.

Written with an eye-gaze computer and a movie set to be released this summer, Simon Fitzmaurice is truly an inspiration to anyone struggling with a disease but more so for those of us on the outside unaware and unsure how to contemplate such a struggle. His words were eyeopening for me and not ones I'll soon forget.

I wholeheartedly recommend this book to everyone. Enough said.