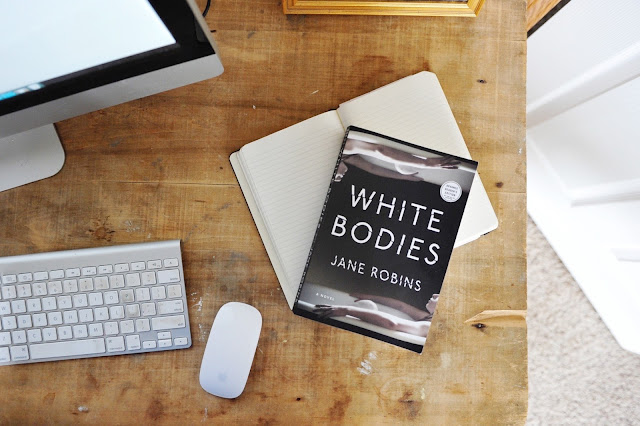 Ohhhh goodness. This book! A psychological thriller that kept me absolutely clueless until the very end, I cannot say enough about White Bodies by Jane Robins. I have a really hard time reading a lot of the thrillers on the shelves right now, especially ones with a recommendation that begins with "If you loved Gone Girl...". Please. (eye roll) I've given a few a chance and have ultimately been disappointed with lackluster characters that have no redeeming qualities, a choppy story line or a predictable ending. Its frustrating and ultimately a genre I've just left alone.

I'll be honest, I went into White Bodies with much the same (bad) attitude. And then I kinda forgot about all those other books as I got to know twin sisters Callie and Tilda. And then Tilda's new boyfriend Felix. Such a tangled, twisty creepy relationship the three of them had right from the beginning....and try as I might I could not figure out what was happening! I had a few suspicions and thought out a few different scenarios for the ending but man, I was way off. Which is exactly how a good, well written thriller of any sort is supposed to be. Bravo Jane Robins! You did your job extremely well.

I'd recommend this book to anyone looking for a thriller that will genuinely keep you guessing, involves characters that are "normal" but also really kind of weird/twisted underneath and involves enough plot lines woven through that you're not sure exactly what is what and how it relates to the ultimate outcome. There were plenty of times I actually had to put the book down and walk away for a bit to process the last few chapters I had just read, to see if I could figure it out.

Heres a quick synopsis:
Felix and Tilda seem like the perfect couple: young and in love, a financier and a beautiful up-and-coming starlet. But behind their flawless façade, not everything is as it seems.Callie, Tilda’s unassuming twin, has watched her sister visibly shrink under Felix’s domineering love. She has looked on silently as Tilda stopped working, nearly stopped eating, and turned into a neat freak, with mugs wrapped in Saran Wrap and suspicious syringes hidden in the bathroom trash. She knows about Felix’s uncontrollable rages, and has seen the bruises on the white skin of her sister’s arms.Worried about the psychological hold that Felix seems to have over Tilda, Callie joins an Internet support group for victims of abuse and their friends. However, things spiral out of control and she starts to doubt her own judgment when one of her new acquaintances is killed by an abusive man. And then suddenly Felix dies—or was he murdered?

Thank you Touchstone books for the advance copy! White Bodies will be released in September of 2017!