Things That Happened Before The Earthquake by Chiara Barzini 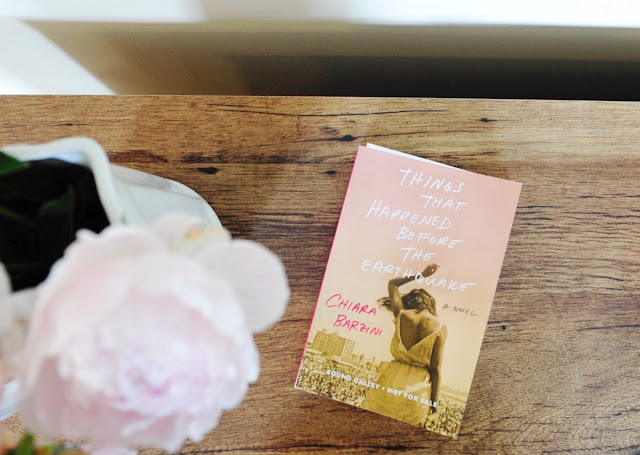 I recently finished Things That Happened Before the Earthquake by Chiara Barzini and couldn't wait to share my review! Told in three sections, TTHBTE is a story about Eugenia who is an Italian teenage girl trying to find her place in either her home country (Italy) or nineties LA (where her parents move their family at the start of the book).

So much of this story is relatable on the level of being a teenage girl who doesn't quite fit in. A girl trying to find a place as the "new girl" among different ethnic groups and cliques at her high school, trying to reconcile her family and their annoying tendencies at they navigate America (without being too embarrassed and frustrated by them at the same time) annnnd figure out what it means to be with a boy, what she is "supposed" to do. The first section of the story begins with Eugenia in LA, 1992, starting school and finding some sort of place in this new American world. The second section takes place over a summer on an island in Italy where she and her brother are sent after their first year in LA. The third, culminating section introduces Deva, a girl Eugenia meets and falls for and finally the Earthquake of 1994 that settles the dust and her own view of herself, finally.

There were quite a few moments/lines in this book that bothered me. Situations Eugenia was in, sentences that were written in such a way I can't seem to forget. Overall, I thought the story was unique and well written, that the time period was one of angst in general but more so if you were a teenage girl trying to fit in (I was in first grade in 1994, so a lot of the cultural references went a bit over me).  And honestly, a time I hadn't read in a book before. That grungy, dirty LA of the nineties (a world Eugenia was probably all together too nice for).

I rated this book 3.5 starts on Goodreads much for the reason I stated above but would highly recommend this story and author regardless of my personal reasons regarding a few scenes! I am still thinking of Eugenia and how her story ended, how strong she became through those two years in LA. I'm not sure I would have figured out half of what she did about herself when I was in high school, especially having so many negative experiences right off the bat (ones she decided were omens that they should never have left Italy).

I can't thank Doubleday enough for this advance copy! I enjoyed reading something slightly outside of my usual and am grateful for the chance to give Things That Happened Before the Earthquake an honest review! It will be available for purchase on August 15th!