The Grip of It by Jac Jemc 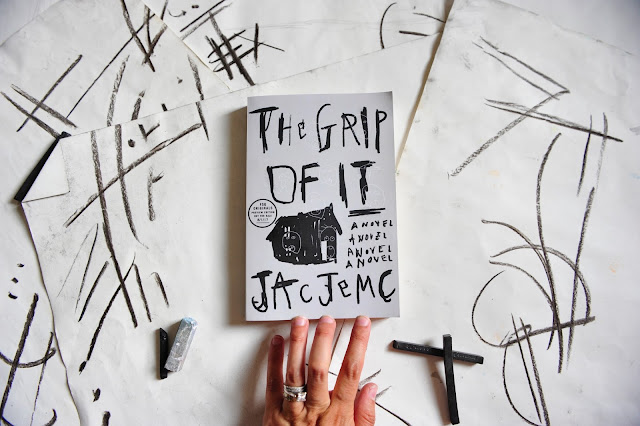 Are you in the mood for a spooky story? About a haunted house and a couple who starts to question who they are, to each other and themselves? THEN THIS IS YOUR BOOK.

I picked up this smallish sized book after FSG Originals sent me a copy thinking "Oh, this will be such a quick read! Look at those short chapters! And I can toss it in my small purse!" Bewared. Short chapters or not, each page was filled with creepy, unsettling psychological or physical paranormal stuff. The first night I read it before bed gave me nightmares and I quickly finished it the next day, with all of the lights on.

Told in alternating chapters between James and Julie, a married couple who move to the suburbs to escape the big city and all of its vices, they realize quickly that they may have gotten more than they bargained for with their new home.

What I loved the most about this book, besides the fact that the supernatural side of things was SO WELL DONE (not cheesy or unbelievable, but just subtle enough that I could almost see it happening) was the deterioration of James' and Julie's relationship. Psychologically they both start to unwind a bit and by the end are questioning everything (rightly so) and everything about each other. Motives, actions, EVERYTHING. Talk about paranoia! But when the other option is a haunted house, maybe that makes sense.

"I take more photos. I say "This is only one way it might be." thinking of all the other ways. I'm either telling a lie or there are so many truths."

A long time ago, during a summer break in high school, I sat by the window in my bedroom and read The Amityville Horror in its entirety. It was so creepy! I still remember thinking about a house having a presence, how it controlled the people inside of it and how I didn't understand why after the very first suspicion, they didn't high tail it out of there. There are hotels! Move away! You can see what is coming.

I felt this way a little bit while reading The Grip of It, but the excellent portrayal of both character's mental states really made me feel as if I was there too. And no, I wouldn't jump to it being a ghost drawing on the wall but more obviously my husband who was home all day. And obviously he's lying about it. And other things too. See what I mean?! Oh goodness. This book really got under my skin!!

I would recommend this book to anyone who enjoys a creepy haunting, who loves the paranormal. I really enjoyed it when all was said and done (and am thankful we are not still living in our century old home).