A Piece of the World by Christina Baker Kline 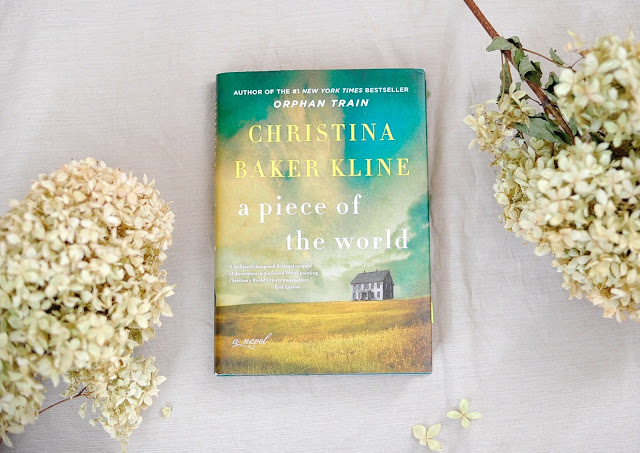 "He did get one thing right: Sometimes a sanctuary, sometimes a prison, that house on the hill has always been my home. I've spent my life yearning toward it, wanting to escape it, paralyzed by its hold on me." (prologue)

I cannot say enough how much I loved this story. Christina Baker Kline (author of The Orphan Train)  has magnificently portrayed the quiet life of Christina, the girl in Andrew Wyeth's famous painting Christina's World (see photo below, from the back of the book). 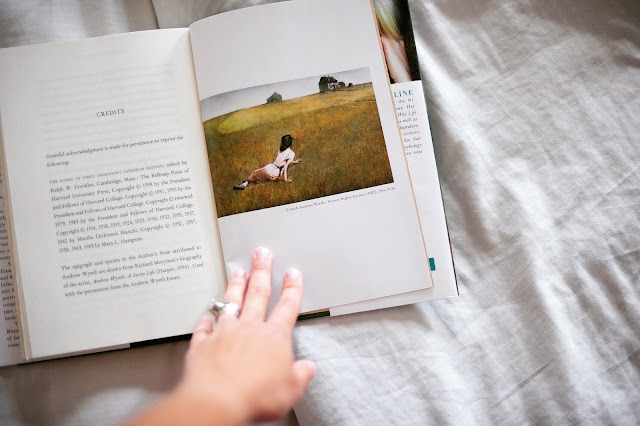 I really love reading books about art, works of art lost and found, artists and paintings. As an art teacher and someone who thinks the perfect date is wandering around an art museum, its really no surprise that these are the type of stories I get excited about. A Piece of the World was no different. There is something really fulfilling to me, reading a story about a work of art. I've seen Christina's World in person at the MOMA and felt moved by the girl in the painting. The way her arm is outstretched reaching toward that house. The colors in the grasses. The mystery of her face. I already felt a kinship toward Kline, who has also wondered these same things, enough to write a story about it.

Kline's story slowly unfolds between Christina's present at the time of the painting and her past, as a young girl growing up in the farmhouse with her family. After a strange illness as a child, Christina's bones and muscles begin to deteriorate over time, affecting her ability to walk, run and be a 'normal' person.

Over time Christina adjusts to her life of hard work on the farm with her head held high, despite numerous instances of humiliation and meanness. We see glimpses of her true emotions regarding her condition and her frustration with it but I really think, rather than it being a character flaw (or as some reviewers have said, she was too flat of a character) I think her lack of emotion is a vital part of her character. There are enough moments where she lets herself really feel that I think show in contrast how vital her hardness of character is to her everyday life. She wouldn't have been able to get through her days of work and cleaning and cooking, dragging herself along the walls and up stairs, if she let every emotion show.

I had to put the book down about halfway through, as her relationship with Walton reaches a breaking point. It was hard as a reader to see that outcome happening before Christina, knowing how devastated she would be. Seeing a glimpse of something different, a life path completely opposite of the one she had so long resigned herself to, be closed before she could experience it was heartbreaking.

"It feels as if my life is moving forward at two separate speeds, one at the usual pace, with its predictable rhythms and familiar inhabitants, and the other rushing ahead, a blur of color and sound and sensation. It's clear to me now that for twenty years I have gone through the motions of the day like a dumb animal, neither daring to hope for a different kind of life nor even knowing enough to desire one." (p. 120)

Reaching her lowest point, Christina compares herself to the main character in The Yellow Wallpaper, seeing her self confined to the farmhouse forever. It was a hard section of the book to read, trying to put myself in her position. I appreciated the breaks from this sadness as we traveled to her present day, enjoying Andrew Wyeth's company and companionship as he painted on her property.

The outcome of the painting, the way Wyeth positioned Christina on the field, starts to have new meaning as the story moves forward. Christina looks toward her future with determination and resolve, knowing she has resigned herself to it, that her pride (as her parents stated multiple times during her child hood) and her fears kept her there too.

"Maybe my memories of sweeter times are vivid enough, and present enough, to overcome the disappointments that followed. And to sustain me through the rest." (p.217)

"Do our natures dictate the choices we make, I wonder, or do we choose to live a certain way because of circumstances beyond our control?" (p.240)

In the end, I think what really made me love this book was how well Kline was able to give Christina from the painting and entire story, make her a character that was entirely realistic and believable. Which is something I wonder about any painting I stand in front of for more than a few seconds. Who is this person? What are they thinking? What is their story?

I highly recommend this book! Especially if you love wondering about the story behind a painting too. Christina is not a character I will soon forget.