At the Wolf's Table by Rosella Postorino 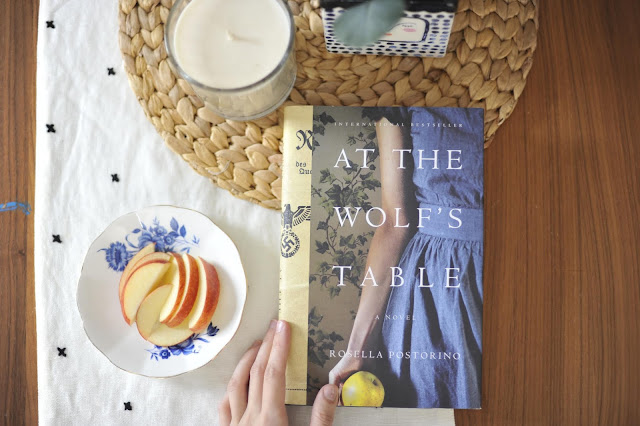 "For months I had been devoted to nursing a pain that distracted me from everything else, a pain so extensive that it had gone beyond the original object of that pain. It had become a personality trait." p.97

Told from the point of view of Rosa, a food taster for Hitler during the end of WWII, I started this book not having any idea what to expect. This is a translation from Italian and I was curious if I would be able to notice, but I couldn't. I also didn't know anything about this specific event, the women that were enlisted to taste each of Hitler's meals before he was served to ensure that the food wasn't poisoned.

At the Wolf's Table, it turns out, is more than just Rosa's story as a food taster. It's Rosa's story of perseverance and survival during WWII, as a young German wife who's husband has left to join the war and may not be coming back. Rosa's story is one that left me feeling similarly to The Women in the Castle- that these German women who were left behind during the war have a story to tell too. I found myself wondering what life would have been like if my husband or family believed in the Nazi party but I did not. Where would my duty reside? With them or myself? What lengths would I go to to survive during the years alone while my husband was gone? Especially if I wasn't a "Fanatic" as the women food tasters who supported (and fantasized about) Hitler were called in the story. Rosa faces all of these questions, learning what she is able to survive and what it means to carry on relationships after the war is over. And she faces them while every single day wondering if she will die while eating Hitler's food.

I copied out SO many lines from this story into my book journal. The author has such a way with words, beautifully capturing Rosa's heartache and longing and need to survive through her every day life, while also showcasing what she lost in the past.

"When you lose someone, the pain you feel is for yourself, the pain that you'll never see them again, never hear their voice again, that without them, you think, you'll never make it. Pain is selfish. That was what made me angry." p.270

What I loved most about this book was Rosa's character. She felt very real to me. I also loved the way the story was written, which gave room for the story to develop as well as Rosa's fears, anger, hopes and desire to survive.

"The past doesn't go away, but theres no need to dredge it up; you can try to let it rest, hold your peace. The one thing Ive learned from life is survival." p.272