Live from Cairo by Ian Bassingthwaighte 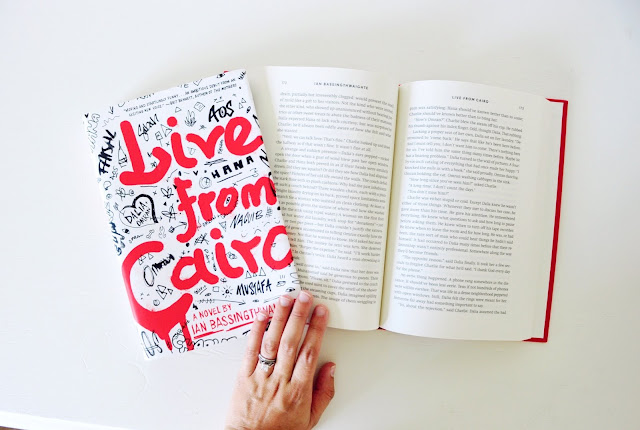 "Her prayers had gotten lost in a city full of protests, full of smoke."

If you read the synopsis (here) you might think, like I did, that Live from Cairo doesn't sound like something you'd usually be up for reading much less move to the front of your ever growing TBR list. When I received this from Scribner books, that was my first thought! Its always hard to decide what book gets hauled to the front of that ever growing line up! There are so many good books out there.

I decided to take a page out of a fellow bookstagrammers book and give the first chapter a read, at least. That way I'd know the writing style and maybe meet a character or two. And wouldn't you know, I was six chapters in before I even realized it!! Isn't that the mark of a great book? One that pulls you in with its writing or an unforgettable character or a setting that makes you want to crawl into the book and be there too? I was totally surprised! This book, Live from Cairo by Ian Bassingthwaighte, was not what I expected!

Told from the perspectives of multiple characters, Live from Cairo is a story about what it takes to make the 'right' decision, to overcome politics and prejudice and fear to save somebody. Whether or not it succeeds in the end. Live from Cairo takes place during the Egyptian revolutions of 2011, after the overthrow of Mubarak. The characters we meet are grappling with curfews, with the army around every corner who takes people to the basement of the museum and tortures them to prove a point, as well as with their own personal struggles. Together, this combination creates a rather intense sequence of events that center around a refugee named Dalia who is stuck in Cairo awaiting a pass to meet her husband in the United States.

I cannot say enough how surprising the entire story was for me. I enjoyed meeting each of the characters, seeing their lives unfold in a setting and story that was very outside of what I normally read. I really don't know much about what is involved with refugees applying for leave to other countries. Seeing these characters grapple with the concept that Dalia is just a drop in the bucket when it comes to the sheer number of people just like her wanting to escape their home countries, despite how devastating her personal story was, I couldn't wrap my own mind around it. The unlikely friendships formed around her case, as Hana and Charlie become more and more consumed with saving Dalia for as much their own personal reasons as anything else, made this such an interesting read.

I tried not to spend too much time caught up in what I didn't know, the riots and the political atmosphere, etc. I did some research after I finished but felt it wasn't necessary to the story that I  do so while I was reading it. The characters themselves and the writing alone were enough to carry me through some of the confusing parts to the end. I cannot say enough how much I appreciated the ending to this story either. What could've been tied up nicely was made more realistic and believable than I could have hoped or anticipated.

I highly recommend this book! Live from Cairo has a strong footing in our world right now,  one that may give a reader more empathy to those involved with refugee cases and the refugees themselves, waiting for absolution in the form of a yellow card.

Thank you Scribner books for the copy!

Live from Cairo by Ian Bassingthwaighte
322 pages
Published by Scribner