The Dressmaker's Dowry by Meredith Jaeger 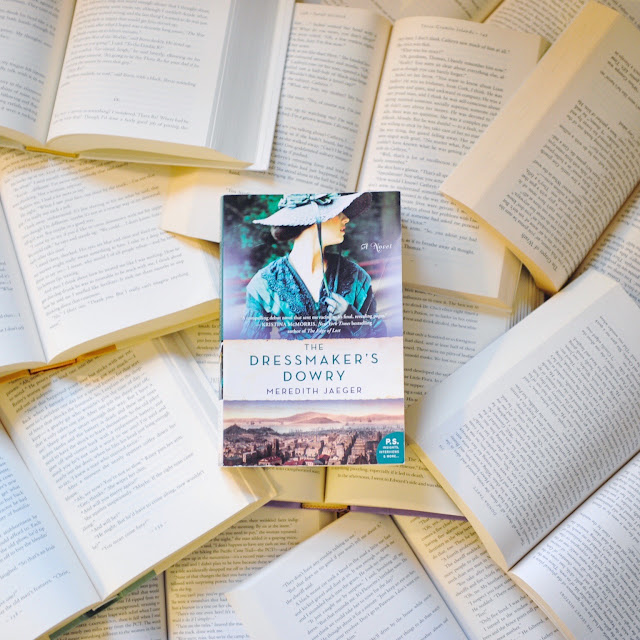 After finishing The Dressmaker's Dowry by Meredith Jaeger I needed to take a little break before selecting my next book. It's always hard to find your next read after finishing one that has completely swept you up inside it's world! I read this book pretty quickly because I had such a hard time putting it down!

The Dressmaker's Dowry is a story told in two parts, the first of two dressmakers in San Francisco during the later 1800's that are living under extremely poor conditions and with very abusive fathers and little siblings they must take care of. After meeting a wealthy gentleman and his cousin in their dress shop, the main character Hannelore, is taken with with him. Through a turn of a chance she ends up meeting him for a night at the opera. After Hannelore's dressmaker friend Margaret disappears, Lucas is the only person she can turn to for help. Thus begins their adventure and romance, spending time scouring the back alleys of the Barbary Coast and skirting the dangers there.

I found this part of the story to be extremely fascinating as I knew nothing previously of San Francisco during this time. I've read books that take place right before the turn of the century in Chicago or NYC but never out on the West Coast. Jaeger did a fantastic job describing life and situations the poor were met with, with exquisite detail and I really felt transported there. These chapters really kept the book moving and I felt compelled to find out what happened to both girls as quickly as possible!

The second part of the story, told in alternating chapters, is that of Sarah Havensworth and her "perfect" husband (so he seemed written in the story!) Sarah is struggling with a thesis paper when inspiration strikes as she stumbles across a newspaper article mentioning two dressmakers that disappeared during 1876. Intrigued, Sarah begins researching further and finds that her husband's family may have a direct link to the missing girls.

The chapters that involved this part of the story did not capture me quite as much as the others, mostly because I couldn't quite love Sarah's character. I found the way she approached her relationship with her husband to be strange, with being out researching or at bars with her friends while not really spending much time with him. I know this had a lot to do with her own secret and her pulling away from him but it made me like her less, if that makes sense.

What I loved most about the way the two stories came together were the little details that would pop up in the past and reoccur in the present (or vice versa). Sort of like a puzzle being put together, I was anxious for Sarah to find out what had happened to the dressmakers and how she fit into the story.

The ending was quite a shocker, considering where I though the story was going to go but I loved it! All the way up to the last page I was not disappointed. I think most of what Hannelore and Sarah  struggled with during the book was concluded in a respectful way (without it seeming overly perfect or tied with a ribbon).

Meredith Jaeger, thank you so much for sending me a copy of this book! I loved it! It was such an easy read to get lost in and I am already missing the world you created in San Francisco and the dressmakers.