The Barrowfields by Phillip Lewis 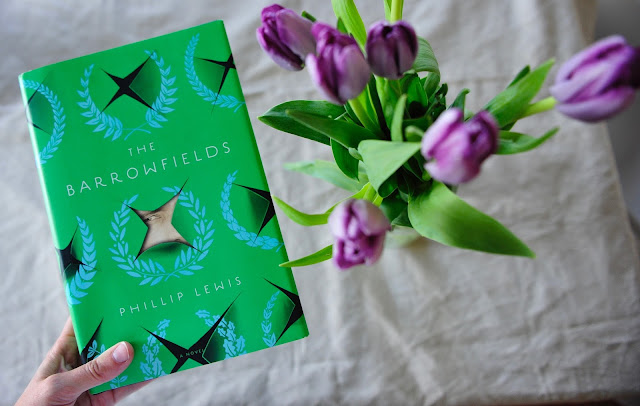 After reading a few very positive reviews online, I decided to read The Barrowfields by Phillip Lewis as a change of pace from the historical fiction I have been reading of late. I was not disappointed! A coming of age story about a father and son, this is the type of book I usually hesitate to pick up. Heavy, emotional and not something I can usually relate to.

Surprisingly, I was hooked from the opening pages. Set in the backwoods of North Carolina, the descriptions of life in such a place was eye opening and heart catching. The people, the lives the led all brought me into the story right from the beginning. As we meet Henry Aster's father in his early years (a book lover and intellectual from an early page and very out of place in such a life), I felt so much promise for this young man. As he left for college and met his wife, I wondered how this story would circle back around to his life in North Carolina. And circle back around it did, as we watch his own young son grow up in those same backwoods between the mountains. As his father struggles to write the next great American novel, young Henry idolizes and worships the ground he walks on and it is clear how the stage is set for the remainder of the story, the relationship between these two characters.

I don't want to give away any spoilers but the tragedies that strike the Aster family as Henry is growing up change him in ways he cannot undo. As he moves ahead and away from his life in North Carolina, for college, he's unable to escape the affects his childhood and his father had on him. It was incredibly heartbreaking to read at times, to witness how such simple acts of selfishness and absorption from his father could wreck such havoc on a son's soul and person. And yet, that powerful bind between father and son couldn't be severed.

"-although much of the child's love I had once felt had been replaced, I think, by a souring and pathetic sympathy for the wasted existence my father had come to represent. Yet I knew he had a good heart, and a kind heart, and on this night it was comforting to simply be near him." p. 330

The Barrowfields, from opening line to the very last sentence, captured my heart and reeled me in. Lewis's writing is sublime, truly. There were passages about time and hell that just took my breath away, the truth of how fleeting our time is and how quickly our experiences and relationships are left meaning nothing to no one as generations pass on without us. I found myself rereading certain paragraphs, captivated by the truth in the words written not just about Henry and his father but life in general. It's been a long time since I read such a masterpiece of a story.


So grateful to Blogging for Books for this copy in return for my honest review! Thank you!