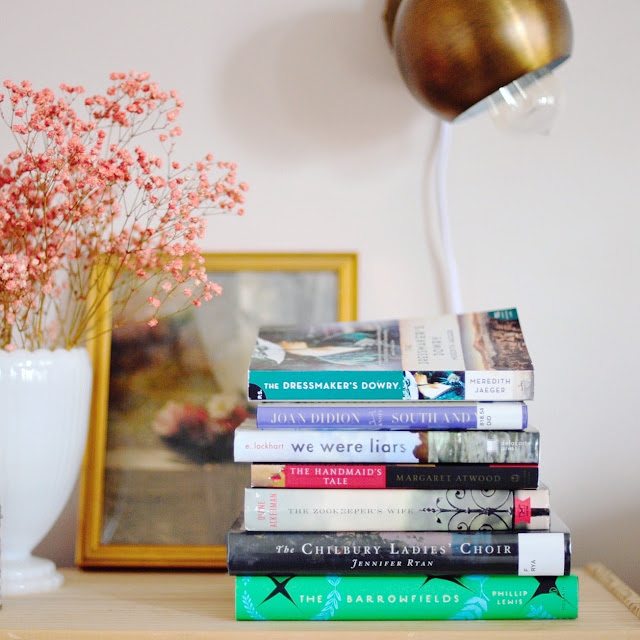 One of my favorite things about the start of a new month is selecting what books I think I may want to read! I try to not stress too much if I don't get to them all or if I had a few in, but its fun to think ahead. I've been trying to choose more books from my shelves and also more books from the library shelves (all in the name of spending less money on books) but I think every book lover knows how that goes.

My reads for April include quite a few I've been looking forward to. From the top!

1. The Dressmaker's Dowry by Meredith Jaeger: I received this book from Meredith via Instagram and was so so thrilled. She's the sweetest! I'm about halfway through and loving the historical context. Can't wait to share a solid review when I'm finished!

From Goodreads:
...this gripping historical debut novel tells the story of two women: one, an immigrant seamstress who disappears from San Francisco’s gritty streets in 1876, and the other, a young woman in present day who must delve into the secrets of her husband’s wealthy family only to discover that she and the missing dressmaker might be connected in unexpected ways.
An exquisite ring, passed down through generations, connects two women who learn that love is a choice, and forgiveness is the key to freedom...


2. South and West by Joan Didion: I love Joan Didion's writing and was so excited to see she was releasing a short book of essays from one of her personal notebooks. This should be a quick read and I'm really looking forward to it!

From Goodreads:
Joan Didion has always kept notebooks: of overheard dialogue, observations, interviews, drafts of essays and articles--and here is one such draft that traces a road trip she took with her husband, John Gregory Dunne, in June 1970, through Louisiana, Mississippi, and Alabama. She interviews prominent local figures, describes motels, diners, a deserted reptile farm, a visit with Walker Percy, a ladies' brunch at the Mississippi Broadcasters' Convention. She writes about the stifling heat, the almost viscous pace of life, the sulfurous light, and the preoccupation with race, class, and heritage she finds in the small towns they pass through.
And from a different notebook: the "California Notes" that began as an assignment from Rolling Stone on the Patty Hearst trial of 1976. Though Didion never wrote the piece, watching the trial and being in San Francisco triggered thoughts about the city, its social hierarchy, the Hearsts, and her own upbringing in Sacramento. Here, too, is the beginning of her thinking about the West, its landscape, the western women who were heroic for her, and her own lineage, all of which would appear later in her acclaimed 2003 book, Where I Was From.


3. We Were Liars by E. Lockhart: My sweet bookish friend Amanda gifted this to me recently and I am looking forward to seeing what all of the excitement is about! She's already finished it and patiently waiting for my opinion on a few things I think. This is one of the only YA books that made my list for April!

From Goodreads:
A beautiful and distinguished family.
A private island.
A brilliant, damaged girl; a passionate, political boy.
A group of four friends—the Liars—whose friendship turns destructive.
A revolution. An accident. A secret.
Lies upon lies.
True love.
The truth.
We Were Liars is a modern, sophisticated suspense novel from New York Times bestselling author, National Book Award finalist, and Printz Award honoree E. Lockhart.
Read it.
And if anyone asks you how it ends, just LIE.


4. The Handmaids Tale by Margaret Atwood: I read this a few years ago and am so excited to read it again. I've seen quite a few other bloggers reading it also and have enjoyed reading their thoughts on Offred and the overall story of the book. This is one of the good ones.

From Goodreads:
Offred is a Handmaid in the Republic of Gilead. She may leave the home of the Commander and his wife once a day to walk to food markets whose signs are now pictures instead of words because women are no longer allowed to read. She must lie on her back once a month and pray that the Commander makes her pregnant, because in an age of declining births, Offred and the other Handmaids are valued only if their ovaries are viable. Offred can remember the years before, when she lived and made love with her husband, Luke; when she played with and protected her daughter; when she had a job, money of her own, and access to knowledge. But all of that is gone now...


5. The Zookeeper's Wife by Diane Ackerman: This has been ALL OVER the internet what with the new movie coming out. Ive had this one on my shelves for years and only recently found it again! I thought I'd add it to my list this month just in case I get a chance to see the movie. (Books first! Always.)

From Goodreads:
In 1939 Poland, Antonina Żabiński (portrayed by two-time Academy Award nominee Jessica Chastain) and her husband, Dr. Jan Żabiński (Johan Heldenbergh), have the Warsaw Zoo flourishing under his stewardship and her care. When their country is invaded by the Nazis, Jan and Antonina are—and forced to report to the Reich’s newly appointed chief zoologist, Lutz Heck (Daniel Brühl). To fight back on their own terms, the Żabińskis covertly begin working with the Resistance—and put into action plans to save lives out of what has become the Warsaw Ghetto, with Antonina putting herself and even her children at great risk.

6. The Chilbury Ladies Choir by Jennifer Ryan: I have been waiting months for this book to come out! I love historical fiction set during either WWI or WWII and this one sounds really good! Its a nice break to read a book written through journals and letters sometimes too. I can't wait to read it and may make it my next book!

From Goodreads:
As England enters World War II's dark early days, spirited music professor Primrose Trent, recently arrived to the village of Chilbury, emboldens the women of the town to defy the Vicar's stuffy edict to shutter the church's choir in the absence of men and instead 'carry on singing'. Resurrecting themselves as "The Chilbury Ladies' Choir", the women of this small village soon use their joint song to lift up themselves, and the community, as the war tears through their lives.
Told through letters and journals, The Chilbury Ladies' Choirmoves seamlessly from budding romances to village intrigues to heartbreaking matters of life and death. As we come to know the struggles of the charismatic members of this unforgettable outfit -- a timid widow worried over her son at the front; the town beauty drawn to a rakish artist; her younger sister nursing an impossible crush and dabbling in politics she doesn't understand; a young Jewish refugee hiding secrets about her family, and a conniving midwife plotting to outrun her seedy past -- we come to see how the strength each finds in the choir's collective voice reverberates in her individual life.

7. The Barrowfields by Phillip Lewis: I received this book from Blogging for Books in exchange for a review and am looking forward to seeing what all of the hype is about! It has such good ratings already on Goodreads and Amazon. Father/son stories always get to me!

Just before Henry Aster’s birth, his father—outsized literary ambition and pregnant wife in tow—reluctantly returns to the small Appalachian town in which he was raised and installs his young family in an immense house of iron and glass perched high on the side of a mountain. There, Henry grows up under the writing desk of this fiercely brilliant man. But when tragedy tips his father toward a fearsome unraveling, what was once a young son’s reverence is poisoned and Henry flees, not to return until years later when he, too, must go home again.