I waited anxiously all summer to read Little Fires Everywhere by Celeste Ng, holding on to my ARC copy from Penguin Press and hoping I would have time to read it before my baby was born. Thankfully I did, I ended up finishing it the first weekend we were home from the hospital, during nursing sessions. 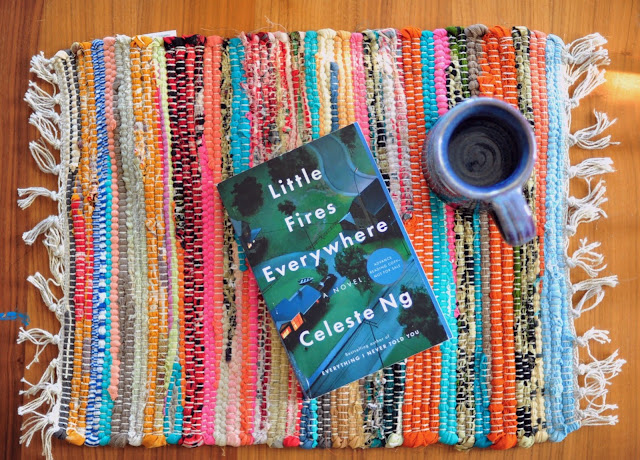 "All up and down the street the houses looked like any others- but inside them were people who might be happy, or taking refuge, or steeling themselves to go out into the world, searching for something better." p. 366

One of my favorite things about this story is that it takes place in Shaker Heights, near Cleveland. There were so many references that I could nod my head at and say "YES", like Chagrin Falls and the depressing weather of NE Ohio. Among other things! It really made the story feel more personal, like it was all taking place the next street over from me.

Celeste Ng has written a powerful family drama with Little Fires Everywhere, one I wasn't able to put down (until I had to!) and created a cast of characters I won't soon forget. I really appreciated Izzy, the youngest sister of the Richardson family and the one misunderstood by most everyone other than Mia Warren. I knew her character was going to evolve and grow throughout the story as she rebelled against the strict black and white morals and perfectly mowed lawns of her life in Shaker Heights. She was by far my favorite character.

As I read this book I felt an overwhelming feeling as though I was spying on all of the characters through a window of their house, taking a peek into their worst moments and thoughts (looking at you Elena Richardson). Trying to make sense of what makes each of them "tick". What I thought was brilliant was that final scene, where the photographer, Mia, leaves each of Richardsons a photograph. It was like Mia had a glimpse into that window but was also able to figure out each of them. The photographs were extremely personal and telling and I felt this was an excellent bit of closure for her time with their family and all that had occurred. Hopefully a lesson learned on their part as well.

"All her life, she had learned that passion, like fire, was a dangerous thing. It so easily went out of control. It scaled walls and jumped over trenches. Sparks leapt like fleas and spread as rapidly; a breeze could carry embers for miles. Better to control that spark and pass it carefully from one generation to the next, like an Olympic torch. Or perhaps, to tend it carefully like an eternal flame: a reminder of light and goodness that would never- could never- set anything ablaze. Carefully controlled. Domesticated. Happy in captivity." p.174

Overall, I rated this book 4 stars and am excited to share it with other readers! The symbolism of those "little fires" at the beginning of the story really hit home by the time I turned the last page- and thats what I think makes for a brilliant and well written story. I think we all need to take more time to light our own little fires (figuratively of course) and possibly change someones perspective or life.

Thanks again to Penguin Press for my ARC! Little Fires Everywhere will be out September 12th!