The Animal Under the Fur by E.J. Mellow 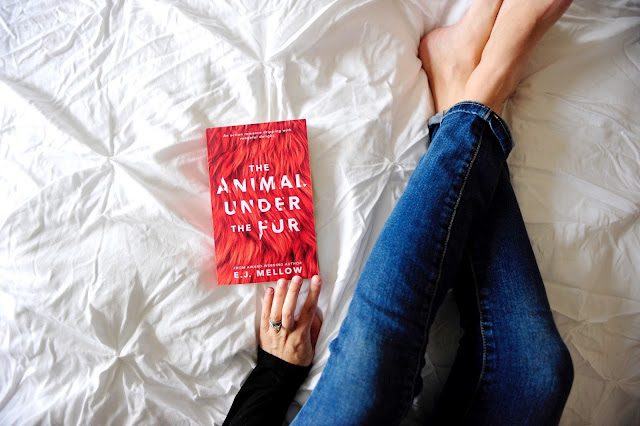 I finished The Animal Under the Fur by E.J. Mellow a few weeks ago, after reading it as fast as humanly possible. I couldn't put it down!! I definitely ordered this on a whim, pulled in unashamedly by the various posts on Instagram I was seeing before the release. I splurged on the paperback copy (I can't read on e-readers) and am SO glad I did!

Nothing gets me to read a book faster than when I can picture the story unfolding in my head like a movie. From the first chapter, the seamless writing and easy to follow storyline pulled me in and I was a goner.

Set around the main character, Nashville (or Kill Operative 3, her "work" name) the story takes off right away introducing us to a kick-ass unforgettable character and doesn't let go until the very last line. As the plot unfolds and Nashville has to align herself with another hired assassin, Carter, the fierce and sexual tension between them becomes almost too much to read! It made me turn the pages faster, hoping for each of them that they would just fight it out and then get it together. As much as both characters had their own arsenal of flaws and negative qualities, I rooted for them the whole time, hoping they would find each other and a little bit of peace amongst all the killing and espionage.

I don't want to share too much of the actual story, its too good and plays out like any five start blockbuster movie would, fast and furious and set in an exotic/foreign setting. I will say this, if you need something good to read, just really really good and want a cool, enviable strong, bad ass female character to go with it: THIS IS YOUR BOOK.

So so glad I splurged on this one, it didn't let me down in the slightest.

The Animal Under the Fur by E.J. Mellow
452 pages
Published by Four Eyed Owl

Labels: book review E.J. Mellow The Animal Under the Fur