The Lost Girls of Paris by Pam Jenoff

One morning while passing through Grand Central Terminal on her way to work, Grace Healey finds an abandoned suitcase tucked beneath a bench. Unable to resist her own curiosity, Grace opens the suitcase, where she discovers a dozen photographs—each of a different woman. In a moment of impulse, Grace takes the photographs and quickly leaves the station.
Grace soon learns that the suitcase belonged to a woman named Eleanor Trigg, leader of a network of female secret agents who were deployed out of London during the war. Twelve of these women were sent to Occupied Europe as couriers and radio operators to aid the resistance, but they never returned home, their fates a mystery. Setting out to learn the truth behind the women in the photographs, Grace finds herself drawn to a young mother turned agent named Marie, whose daring mission overseas reveals a remarkable story of friendship, valor and betrayal.
Vividly rendered and inspired by true events, New York Times bestselling author Pam Jenoff shines a light on the incredible heroics of the brave women of the war and weaves a mesmerizing tale of courage, sisterhood and the great strength of women to survive in the hardest of circumstances. 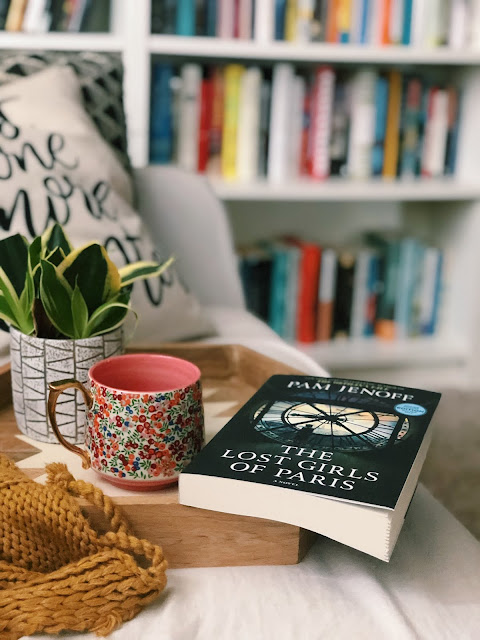 Keep reading for an excerpt from the book! The Lost Girls of Paris by Pam Jenoff is out January 29th!
Grace turned to face it. Grand Central loomed before her, its massive shadow darkening the pavement below. Commuters streamed endlessly through its doors. She imagined the inside of the station, the concourse where the light slatted in through the stained glass windows, the big clock where friends and lovers met. It was not the place she couldn’t bear to see, but the people. The girls with their fresh red lipstick, pressing tongues against teeth to make sure the color hadn’t bled through, clutching purses expectantly. Freshly washed children looking just a bit nervous at seeing a father who they could not remember because he had left when they were scarcely toddlers. The soldiers in uniforms rumpled from travel bounding onto the platform with wilted daisies in hand. The reunion that would never be hers.
She should just give up and go home. Grace longed for a nice bath, perhaps a nap. But she had to get to work. Frankie had interviews with a French family at ten and needed her to take dictation. And after that the Rosenbergs were coming, seeking papers for housing. Normally this was what she loved about the work, losing herself in other peoples’ problems. But today the responsibility weighed down heavy upon her.
No, she had to go forward and there was only one choice. Squaring her shoulders, Grace started toward Grand Central.
She walked through the station door. It was the first time she had been here since that afternoon she’d arrived in her best shirred dress, hair perfectly coiffed in victory rolls and topped with her pillbox hat. Tom hadn’t arrived on the three fifteen from Philadelphia as expected and she assumed he had missed his connection. When he didn’t get off the next train either, she became a bit uneasy. She checked the message board beside the information booth at the center of the station where people pinned notes in case Tom had come early or she had somehow missed him. She had no way to reach him or check and there was nothing to do but wait. She ate a hot dog that smudged her lipstick and turned sour in her mouth, read the newspaper headlines at the kiosk a second, then a third time. Trains came and emptied, spilling onto the platform soldiers that might have been Tom but weren’t. By the time the last train of the night arrived at eight thirty, she was frantic with worry. Tom never would have left her standing like this. What had happened? Finally, an auburn-haired lieutenant she’d recognized from Tom’s induction ceremony came toward her with an expression of dread and she’d known. She could still feel his unfamiliar hands catching her as her knees buckled.
The station looked the same now as it had that night, a businesslike, never-ending stream of commuters and travelers, undisturbed by the role it had played so large in her mind these many months. Just get across, she told herself, the wide exit at the far side of the station calling to her like a beacon. She didn’t have to stop and remember.
Something pulled at her leg strangely, like the tearing of a small child’s fingers. Grace stopped and looked behind her. It was only a run in her nylons. Had Mark’s hands made it? The tear was growing larger with every step now, an almost gash across her calf. She was seized with the need to get them off.
Grace raced for the stairs to the public washroom on the lower level. As she passed a bench, she stumbled, nearly falling. Her foot twisted, causing a wave of pain to shoot through her ankle. She limped to the bench and lifted her foot, assuming that the heel that she had not had fixed properly had come off again. But the shoe was still intact. No, there was something jutting out from beneath the bench she had just passed that had caused her to trip. A brown suitcase, shoved haphazardly beneath. She looked around with annoyance, wondering who could have been so irresponsible as to leave it like that, but there was no one close and the other people passed by without taking notice. Perhaps whoever owned it had gone to the restroom or to buy a newspaper. She pushed it farther underneath the bench so that no one else would trip on it and kept walking.
Outside the door to the ladies’ room, Grace noticed a man sitting on the ground in a tattered uniform. For a fleeting second, she was glad Tom had not lived to fight and return destroyed from what he had seen. She would always have the golden image of him, perfect and strong. He would not come home scarred like so many she saw now, struggling to put a brave face over the brokenness. Grace reached in her pocket for the last of her coins, trying not to think about the coffee she so dearly wanted that she would now have to do without. She pressed the money into the man’s cracked palm. She simply couldn’t look away.